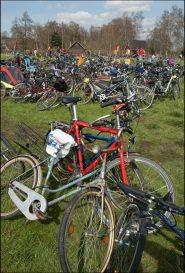 After spending three years touring our cycling film Beauty and the Bike, in 2013 we sat down to take stock of what we could offer as a follow-up. That film had contrasted cycling conditions in a UK town with Bremen. In doing so, it dwelt largely on the many positives that Bremen offers. Yet there was little explanation of how Bremen became a cycling city in the first place. This pricked our curiosity, so we decided to set out on a journey of enquiry to better understand why, at around 25% of journeys, Bremen is the outstanding large city in Germany for everyday cycling.

Germany is a country with massive differences in its cycling culture. Its federal system of government means that different Länder have been able to develop traffic policy in highly divergent ways. So whilst central federal policy is important in offering guidance and finance, the story of Bremen’s development as a cycling city is very particular to Bremen itself. To understand Bremen’s cycling culture today, we need to understand Bremen’s history.

Surprisingly for a cycling city, there is little dedicated cycling history. Even the monster post-1945 history work, Geschichte der Freien Hansestadt Bremen by Barfuß, Müller and Tilgner fails to specifically mention cycling at all. One article that attempts such a history appears in the 1987 book Verkehr in Bremen, edited by Hartmut Roder. Radfahren in Bremen (Froitzheim & Lüers) attempts a history of cycling up to that decade, though there are no references cited to back up the, often controversial, figures for cycling’s modal share. Beyond that work, Bremen has largely accepted its cycling city status as “just how it is”.

Fast forward to today, an era where cycling has become a high-profile tool for administrations around the world to combat urban congestion and air pollution, climate change and western lifestyle-induced ill-health. Bremen’s status as a cycling city is heralded at international conferences as an example to the wider world (PRESTO project Champion City, SUMP conference Bremen Declaration). Yet there seems little to suggest that an understanding of how Bremen got to where it is informs current policy. This in itself would not matter much if the city had seen significant progress in cycling’s modal share since it became a traffic/climate/health policy tool. But in fact cycling in Bremen has stagnated over the past 20 years (1996:22%, 2008: 25%, 2013: 24.8%).

Why might this be? Whilst many other cities have successfully adopted a policy of making car use less attractive and cycling easier, Bremen’s policies are less clear. Are the lessons from failed, as well as successful, cycling policies worldwide informing Bremen’s policies? The idea of a Verkehrswende, or transport transformation in the same spirit as the transformation of the energy sector towards renewables, does not appear to be up for consideration. Are Bremen’s climate aims being taken seriously? Have the car industry and the Chamber of Commerce successfully closed down any talk of such a policy? Or has the city’s principle cycling lobby organisation, ADFC Bremen, perhaps made too many compromises or, worse, mistakes?

Many questions, so far few answers. So the task Bremenize has set itself is to look behind the scenes of the city’s cycling politics, to better understand Bremen’s cycling history, and to challenge the transport policy objectives of the Hanseatic city. Bremenize is therefore as much an exploration as a celebration of Bremen’s cycling culture. Beyond the statistics and policy debates, there is no doubt that Bremen’s status as a cycling city rides above all on its citizens’ enthusiasm for using the bicycle for everyday mobility. And here the city’s cycling history plays a key role. To paraphrase Karl Marx, the tradition of all dead generations weighs like a pleasant dream on the brains of the living. The fact that such a strong culture exists today gives the city a peoples’ resilience and a respected voice in the face of sometimes sluggish policy developments. It is the relationship between that history, our everyday cycling culture, and the contemporary politics of cycling, that we aim to capture in words and in moving images.