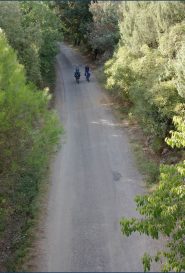 In the south-east of France, there is a line marked on the map “Euroveloroute 8 planned route.” A route that only exists in the imagination of  a planner somewhere in France, it runs through the Haut Var, well off the beaten track, passing through villages that lie in the heart of La Provence Verte, such as Varages Ponteves, Salernes, Montauroux.

Pedelec to Paradise is a voyage of discovery for two elderly cyclists who decide to follow this line on a map. In the process, they uncover the remarkable story of this yet-to-be-created cycle route, which for much of the way follows an old railway line, whose history reveals moving stories of war and resistance. But is the vision of a European Cycle Route shared by the local population?

This ongoing documentary project seeks to examine the cultural role of everyday cycling in local European communities. Following the success of Beauty and the Bike, it broadens the exploration of how cycling is marginalised as an everyday means of transport in many parts of Europe. What could everyday cycling bring to rural communities in southern Europe like La Provence Verte, and who are the local agents of change? Or is the line on the map no more than a dream, a fantasy that will never happen in a society that has all but erased everyday cycling from its mobility vision?

Pedelec to Paradise began production in 2013, and continues as the route develops.