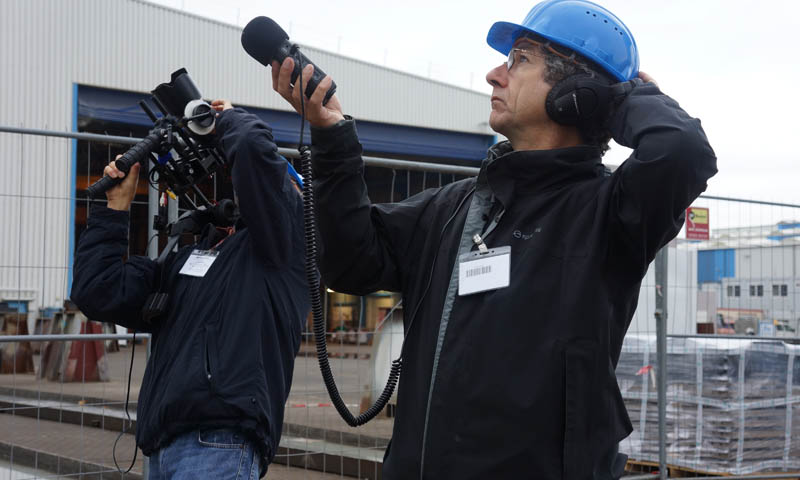 October 1987. Amber Films, a collective based in Newcastle, become the only British film crew to make a documentary inside the German Democratic Republic. In November 1989, a year after the film’s release, the fall of the Wall signals the end of the GDR. 25 years later, the British return – this time Amber Films and Moving Films with Richard, Ellie and Pete from Amber and Beatrix from Bremen, who lived in West Berlin during GDR times.

Warnemünde, September 2014. When Amber and Moving Films track down the protagonists from 1987 in the small harbour, they find a very different Warnemünde. Back then, Amber had filmed two different groups: Members of a fisheries production cooperative and crane drivers from a brigade of the Warnow shipyard in Warnemünde. In fact, both companies have disappeared today.

But they find – with the help of the local press – at least 8 of the protagonists of that time and listen to their story with excitement: When the Wende came, when the Wall fell, hardly anyone there and then wanted to believe it. One of them had just been on her honeymoon in Cuba and returned shocked to another GDR. And the fates of the protagonists that now follow are representative of many in the former GDR: winners, losers, frustrated people and knights of fortune. When they talk about themselves, when they explain why they said what they did back in 1987, they realise how much they self-censored. And then there was the Treuhand, which organised the sell-off of the GDR. The jobs from back then have disappeared. Some will never get over it, but others feel liberated.

We use cookies on our website to give you the most relevant experience by remembering your preferences and repeat visits. By clicking “Accept All”, you consent to the use of ALL the cookies. However, you may visit "Cookie Settings" to provide a controlled consent.
Cookie SettingsAccept All
Manage consent

This website uses cookies to improve your experience while you navigate through the website. Out of these, the cookies that are categorized as necessary are stored on your browser as they are essential for the working of basic functionalities of the website. We also use third-party cookies that help us analyze and understand how you use this website. These cookies will be stored in your browser only with your consent. You also have the option to opt-out of these cookies. But opting out of some of these cookies may affect your browsing experience.
Necessary Always Enabled
Necessary cookies are absolutely essential for the website to function properly. These cookies ensure basic functionalities and security features of the website, anonymously.
Functional
Functional cookies help to perform certain functionalities like sharing the content of the website on social media platforms, collect feedbacks, and other third-party features.
Performance
Performance cookies are used to understand and analyze the key performance indexes of the website which helps in delivering a better user experience for the visitors.
Analytics
Analytical cookies are used to understand how visitors interact with the website. These cookies help provide information on metrics the number of visitors, bounce rate, traffic source, etc.
Advertisement
Advertisement cookies are used to provide visitors with relevant ads and marketing campaigns. These cookies track visitors across websites and collect information to provide customized ads.
Others
Other uncategorized cookies are those that are being analyzed and have not been classified into a category as yet.
SAVE & ACCEPT